You can learn a lot about someone by the baked goods they prefer. Cookie people like to play it safe and stick with what they know. Cake people,

the other hand, are open to new things and will even take chances on cake/fondant/icing/flavor combos that aren’t the norm. Somewhere in the middle of these two groups is the brownie. Members of this brownie brigade have learned why brownies are the best baked good out there:

It’s absolutely true. Brownies. Are. Versatile. They’re so versatile that they’re even versatile in how they’re versatile (Go ahead and read that a second time if I lost you). Think about it –

Brownies are versatile in how you make them. They can be thick, thin, frosted, plain old brownies, brownies with walnuts (yum!), brownies with coconut (double yum!), brownies with cinnamon, fudge, mint, dried fruit (don’t knock it ’til you try it) or any combination of all this chocolaty bliss. Oh! You can also add cheese powder, onion powder and garlic powder. More on that in a minute…

Brownies are versatile in who can make them. Whether you’re some high-profile pastry chef from Paris baking up some gâteau au chocolat or a clueless college bachelor trying to impress a girl with ‘something you made from scratch just for the heck of it’, anybody can make brownies. Anybody.

Finally, brownies are versatile in what they can be used for. They can be rewards for little ones, last-minute contributions to potluck dinners, house-wide air fresheners (remember how it smelled when you came home from school and smelled brownies in the oven? Mmmm…) and as life lessons for thieves at church.

In order to teach such a person a life lesson, you first need to bake some rotten fish brownies, or brownies that smell like…rotten fish (and chocolate, of course).

Wait. Bake some rotten fish brownies? Did they get left out for a few weeks? Was this an accident? Nope and nope. They were baked intentionally (with the three powders mentioned previously) to taste like something nobody would voluntarily eat…or so I thought.

Before I explain why I wasted several brownie mixes on a Sunday School stunt (a subject for another article), we need to take a sidestep into the world of thieves getting their just desserts (pun very much intended).

I made two batches of brownies for a lesson I was teaching. One was a normal, tasty batch and the other smelled (and I’m sure tasted) like something you’d find on the bottom of your shoe…after walking through a kennel…filled with rabid dogs…and rotten fish…and a few piles of compost for good measure).

I left both batches in the kitchen at our church. After the initial meeting in the chapel, it was time to get the brownies for the youth Sunday school class I was teaching. Once I got to the kitchen, however, I noticed something amiss – a single brownie was gone from one of the trays. Someone had stolen a rotten fish brownie! 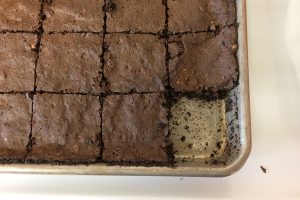 Ha! That blunder would be like a bank robber leaving a bank with a sack of cash and realizing as they drove away that the teller gave them the trash bag from the bathroom instead. This miscreant had snagged one of the brownies with onion, garlic, salt and cheese powder in it! Ha ha ha ha ha!

I started laughing out loud, and had another thought – If someone had come in and stolen a brownie, they would have stuffed it in their mouth and chewed as fast as they could (Don’t ask me how I know this, but food bandits don’t savor their plunder one bite at a time, they cram it in and quickly flee the crime scene).

So…if they ate it as fast as I thought they would have, that means…

And there it was – a chewed up brownie that had been spit out like a shotgun blast. Ha! Ha ha ha ha ha ha haaa! It made my day. The puns that came later made it even better!

Being a member of the brownie brigade mentioned in the first paragraph, I understand the temptation to snag a brownie or two wherever you can…as long as you’re not stealing it…from a tray…in a church (you know, that place that teaches about those ten commandment things, including that pesky #8).

There is so much irony in the situation (the lesson was on the commandments being my favorite one), but I couldn’t even find myself doing anything but smiling over it. That chewed up brownie in the bottom of that kitchen garbage made my week, and reminded me that Karma already taught that poor soul a life lesson and there’s no need to ban him/her from the brownie brigade. Besides, they already lost a ton of brownie points (get it? Ha!)

Well, to end with a cheesy (pun intended) one-liner, I’d say that this thief has definitely gotten their…just desserts. Ha!

Oh, revenge is so sweet…