Sometimes the only way to conquer a meat mountain is by using a bit of trickery. While this truth may be obvious to most folks, there are a few individuals who may need some background on Meat Mountains and the tricks to use when you start climbing. So, for that small minority, let’s talk about Meat Mountains!

First off, there’s this restaurant close to my office. They are best known for their roast beef sandwiches and curly fries. Since I don’t have permission to use their name, I’ll just refer to them as…Darby’s.

A little known (but very cool) fact about Darby’s restaurants is a secret menu item they have – the Meat Mountain. This isn’t a joke either. It isn’t advertised anywhere, but you can order one for just $10. What? Ten bucks for a sandwich? Yes, and when you order it, you get a sandwich with every type of meat they have, multiple cheeses and enough grub to feed a small army! 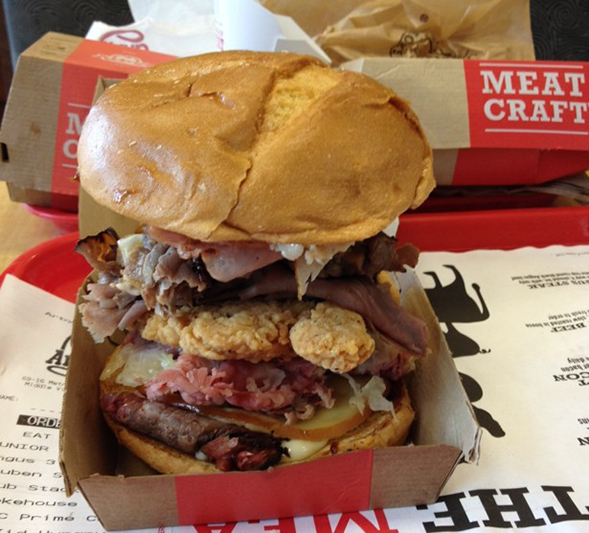 Okay, Bryun. We get it. The Meat Mountain is huge. What about that trickery you mentioned earlier? Great question, random reader! We’ll talk about that…right after we discuss birthdays!

Huh? Stay with me. We’re almost there…

Birthdays are different in our house – we don’t give our kids gifts. Instead, we take them out to a special dinner with mom and dad. They get to choose the place. They get to order anything on the menu they want…even if it’s not actually on the menu (See where this is going?).

My son Kevin wanted to go to…Darby’s…and get the Meat Mountain for his birthday. The birthday rule is that they can get anything they want, even if dad’s rule is that $10 is too much for a single sandwich for a 7-year-old. So how do you honor the birthday rule without going broke over a menu-less sandwich?

This is where the trickery comes in to play. To pull this off, write the following on a business card and give it to the cashier before your son places his order: 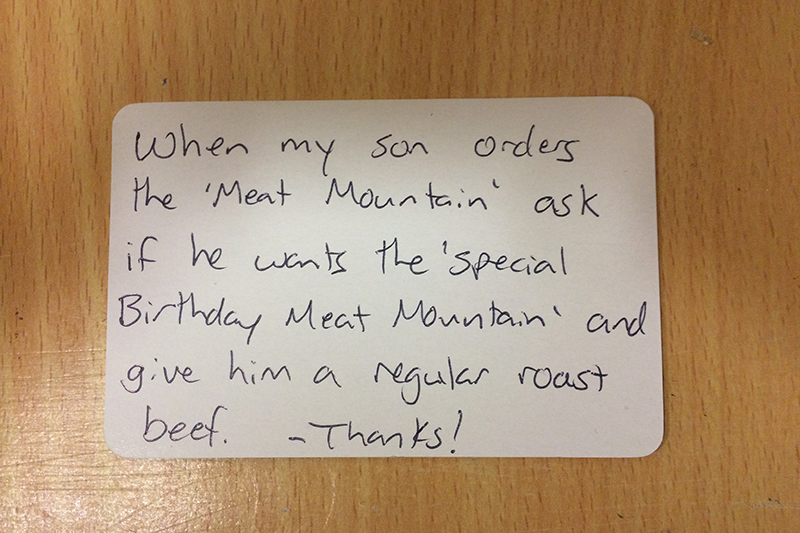 When your little guy gets his regular roast beef sandwich, it’ll appear enormous to his tiny hands, and he’ll enjoy it every bit as much as the sandwich which would’ve cost his dad $7 more.

Score one for cheapskate dad and his version of the Meat Mountain.

Way to go, dad. With a quick trip to fibber island you made your son’s day.

And (for the record), the Meat Mountain is a real thing and is pretty tasty. Maybe with that shameless plug Darby’s will cut me some slack…or just send me gift cards.