A moment that has been on my mind all day was a pivot-point that happened this month. For those who don’t know, a pivot point for Bryun is a rare moment where the direction of our life changes dramatically as a result. This experience reminded me of things I’d forgotten under the burdens of life, it made me grateful for a God who sees the big picture, and it reminded me again what it means to have faith.

Here’s how it all happened:

My daughter Millie fell off a bench and bit through her lip. All the parents know this means you’re going to spend the evening in the ER. So, we bundled her up and went to the hospital.

Once there, the nurses were taking her vitals when her mother decided that being conscious wasn’t a good idea (side-effect of pregnancy) and decided to pass out.

So, I’m in the ER with a screaming 2-year-old and an unconscious wife, and they both got rooms of their own to stay in! (This isn’t the pivot moment…stay with me.)

Fast forward 90 minutes. Cindy’s barely coherent in spite of several attempts to stand up, Millie’s in post-stitch-up snuggle mode, and I’m trying to get them both checked out to go home. We managed to get them both a green light to go home and I ran out to get the van while they were wheeled out on the same wheelchair (Still not the pivot point…it’s coming).

In the parking lot, I was greeted with two sets of keys…both on the seats inside a locked van! Yep, we locked BOTH sets of keys in the car! I head back into the ER, and the Lemon girls there got to be readmitted while I ran home to get a spare key. Did I mention that we didn’t have a spare key? Well, barely coherent Cindy said she thought she made one six months ago, so that was enough to take the chance (Still not there…stay with me).

Fast forward another 15 minutes. Upon arriving home, we started a frantic search for the key that might exist. [SPOILER: It didn’t exist and there was never a key made!] After looking for 10 minutes, my 5-year -old Kevin said we needed to stop looking and pray for God to make a key. I told him we’d pray in a minute, and my daughter Kate was telling him very sternly: “Kevin! He can’t just MAKE a key!” I was thinking the same thing, and to prove my ability to trust in man before God, I called the locksmith to meet me at the hospital (Not the pivot, but it’s coming in the next paragraph…).

So, to get Kevin (who was going around the house to tell everybody we needed to stop and pray for God to make a key) to quiet him down, we stopped to say a prayer. Kevin’s prayer was simple (and makes me cry thinking about it now): “Heavenly Father, we need you to make a key to get in the van so we can get mom and Millie home.” I stood up from the prayer, and went back in my room to get my coat and… there was a box we’ve hadn’t unpacked yet on the bookshelf! It was too random for me to spot a box I hadn’t noticed in months and not open it, right? Well, in the box was a jar of DWLs (Deal With Laters) and one of the things in the jar was a van key we had years ago. It didn’t start the ignition, but it did open the doors! When it stopped working in the ignition, I kept trying to throw it out but never did because the kids kept finding it and bringing it to me whenever I tried. This IS the pivot moment (See below). I cried openly when I showed the kids the key, I hugged Kevin tighter than normal, and I laughed as that little boy ran around the house saying to Kate, “Oh, yeah, I told you He could make a key! Oh yeah, oh yeah, God can MAKE keys!” 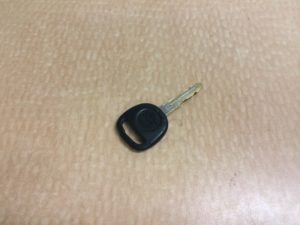 Somewhere in my 4 decades of being on this planet, I forgot what it meant to ask my Father for something and believe he would answer that prayer. I have spent years praying and pleading for something, and before I got up off my knees… I doubted he would or COULD grant what I had asked. My son taught me that night that he can do anything we need Him to do if we just have a miniscule amount of faith (or a 5-year-old with a truckload of the stuff). He taught me that sometimes he asks us to do something, but just as often all he wants is for me to ASK Him…and trust Him.

Oh, and God CAN make anything, even keys. Oh yeah…