When my wife and I were first married, I was…between jobs and my wife was spending a lot of time with her new friend, morning sickness. We had a tiny apartment we couldn’t afford, drove a car that had no gas gauge in it (and was responsible for some interesting stories I’ll save for another day) and we went to my parents’ house for Sunday dinner because it meant leftovers to feed us for a week.

In case you missed the above clues, we were poor. Really, really poor. After a month or so of newlywed bliss, we were still poor and I needed a haircut. It was about that time that I learned my wife owned a pair of clippers and had great aspirations at learning how to use them…on my shaggy head.

Just kidding. She was amazing with those shears. Even if we weren’t poor, I would have wanted her to cut my hair because she was that good. I knew she would be amazing at cutting my hair with those clippers and probably could’ve used them to carve stone and cure cancer and… 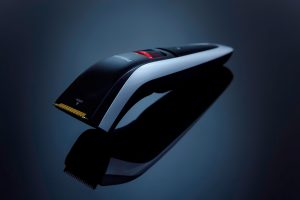 …ahem. My first haircut was pretty much like you’d expect. That’s all I’ll say about that.

After a few years and a few dozen haircuts, we found what worked, where all my cowlicks were and stuck with it for the next 15 years. I figure we’ve saved about $2000 over our married life by having her cut my hair. Ha! Even better than that, I knew what my hair would look like every time and didn’t need to explain it to a hairstylist every six weeks or so.

Now we fast forward to last month. Somewhere during the aforementioned 15 years of haircutting bliss I mentioned something about the length of my sides being too short to comb for the first few days after a haircut. My wife decided to surprise me. For my last haircut, she made a change. The cut was over, I looked in the mirror and saw…even shorter sides?

The conversation at that point went something like this:

Me: The sides are really short.

Her: They’re actually longer. I used the #9 guide instead of the #8.

Me: Are you sure? They look really short.

She felt badly, even though I was fine with it. I knew it would grow back soon, I didn’t have anywhere to go except church, and nobody looks at your hair at church…right?

Wrong, but wrong in a good way. I got three compliments on my hair at church! “Your haircut looks really good,” one guy said. “You look younger,” someone else told me. “Is that a new shirt? Something about you looks different. Younger.” the third complimenter said.

For the first time in a long time, someone who wasn’t my sweetheart/hairdresser commented on how I looked good! It felt nice. When we got home, I looked in the mirror again. You know what? I did look younger.

Quite by accident, I had found something better than what I was doing. My hair looked good before, but now…well, now I was…well, I was practically a world-famous model! I was obviously going to need to hire an agent now, some bodyguards to hold back all my modeling fans, and I was going to need to get myself a new wardrobe to kick off my new modeling career!

Truth be told, I wasn’t sure if I was ready for all that attention and I didn’t want to put my family through the pressures of fame and fortune like that. For their sake, my modeling career was going to have to wait.

Meanwhile, back on earth…

I learned a great lesson. After years of doing things a certain way, a good way, I found something I liked better. I’m still poor, but now I’m a younger-looking poor guy. And this younger-looking poor guy with a new hairstyle learned that sometimes the unplanned things (read: accidents) open doors we never knew were there, teach us something about the world, or just bring a much-needed smile when things are rough.

Or, if you’re lucky, it could be a whole new career…