This is about a child praying. Actually, it’s about two children praying…

It started off when we had some friends over for dinner last night and our 5-year-old asked if he could say the dinner prayer. How sweet. Of course we let him.

“Heavenly Father, we’re thankful my friends could come over and play with me. We’re glad to have dinner with these people, especially Lincoln. We’re thankful for the pile of body parts, weapons and heads we found. In Jesus’ name, amen.”

One of our guests was laughing too hard to say ‘amen’ and his poor wife seemed like she wasn’t sure what to think.

We figured out with our incredible parental questioning skills that our son was referring to a recently-discovered stash of Lego body parts, Lego weapons, and the Lego heads that seemed to be a result of our 3-year-old’s re-enactment of the French Revolution. How the heads and body parts were removed and where they were hidden isn’t critical to the story, but the joy a five-year-old got from finding them is.

You see, as moments like this tend to do, It made me think about that prayer for several hours after the amens were said. I thought again about his prayer as I was going through my laundry-list style of divine petitioning at the end of the day. That little boy prayed with more sincerity than I (and perhaps most adults) seem to.

You see, I’m a big prayer hypocrite. I’m not a believer in reciting some prayer over and over, but I seem to pray for the same things most of the time. So, while I claim to not be a fan of rote prayers, I’ve sent up a few such petitions to the man upstairs.

So, after my son’s hilarious petition to his maker today, I decided tried something different. I remembered a friend sharing a story about an ecclesiastical leader who was staying in their home and offered a prayer with the family one evening. This leader started his prayer by telling God a joke he’d heard that day! Wow.

So to break the rote streak I was on, I thought I’d try it out. I told my creator, my God and my Father in Heaven a joke! I won’t share the joke here because it was pretty dumb. I smiled as I pictured the man upstairs shaking his head at how lame it was, but I knew He was happy to listen all the same.

And then… I just talked with Him about my day. No laundry list of wants, no form letter of thank -yous, no copy-and-pasting of previous pleadings. Just a nice heart-to-heart with my Father above. I imagined Him smiling as I talked, and I imagined Him laughing as I ended our conversation by telling Him about my son’s earlier prayer. I knew He’d already heard it, but it felt good to talk to my Father about my son.

And for the first time in a long time, I laughed out loud during a prayer.

Thanks for the wake-up call, son. It felt good to laugh about that pile of body parts a second time. 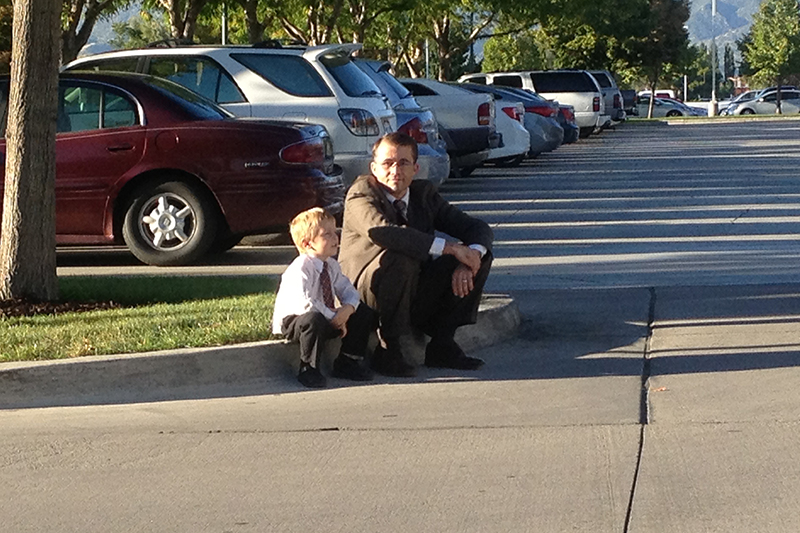 Thanks for listening, Dad. I’ll talk to you again soon.