For the first eight years of her life, my daughter Kate knew that the moon made a sound every night. She knew it, and nobody could have told her otherwise. She didn’t read about it in a book or learn about it in school, but she heard it every night when she went to bed.

…or at least she heard the noise her dad was making out the side of his mouth when they looked up at the moon before putting his little girl in bed each night.

She still remembers that special sound, and even tells her younger siblings about it. Kate and her siblings learned the sound the moon made, as well as countless other things about the world by watching and listening to mom and dad. 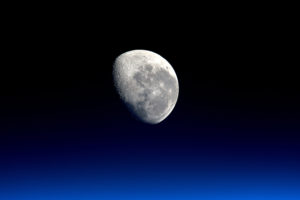 It isn’t just trivial and silly things we teach them, either. At our home, for example, my kids know that the tooth faery is real, dad is the toughest man on earth, mom can fix anything, and that pulling on fingers will sometimes make certain noises. How did they learn these things? They observed. Put a tooth under your pillow and you’ll earn a dollar. Need a heavy toy moved and dad will do it no matter how big it is. Rip your shirt or scrape your knee and mom will make it better. Pull on dad’s finger and…

…you get the idea.

A story that started back on Christmas Eve to further illustrate –

We had just finished moving everything to our new house, the snow was coming down with a vengeance, everyone had gone home and I was going back to the old house to make sure we got everything. It was 2:30 in the morning. As I was leaving my driveway, I got stuck in the gutter/canyon at the end of our driveway. I tried for several minutes to rev, rock, dig, and cuss my way out, to no avail. I was tired, angry, and lamenting that I couldn’t deal with this experience when a neighbor came running over, smiling and laughing like he had just come from a Brian Regan show. He’d been out shoveling sidewalks at 2:30 am (?), and saw that I needed help. Even with my firm resolution to be grim and grumpy, his laughing and smiling in the snow while he dug, pushed, and eventually drove his truck over to tow me out was contagious! By the time he had pulled me down the street to my original destination, I was smiling and laughing as well!

Several days later, we were on our way to church and found ourselves stuck in the same gutter canyon as before. My wife and kids were laughing about it, and I was not. We only had five minutes to get to church, and I was sure I needed to get there in a sour mood.

No such luck on the mood. Within a few minutes, that same shoveling neighbor came running over, laughing and smiling and acting so excited because he already knew where to hook the tow cable! He pulled us out (again), and then ran back to what he was doing before we got stuck – shoveling driveways for other people. We got to church a few minutes late, but we thanks to Mr. Happy, we made it. 45 minutes later, that helpful neighbor and his family came and sat in front of us. I sat in our pew watching him and cried as I saw the example those three little boys had of a dad who missed most of church because he was shoveling driveways and helping others get to church. Those little boys were observing the gospel of Jesus Christ being taught more powerfully than any lecture or lesson could have done.

Two weeks later, I sat behind a different couple and their children. She looked like she had been crying and he looked like he would rather be somewhere else. At one point, she stepped out and the little boys were left there with dad. After the kids started getting a little rowdy, dad did something I’d never seen before in church – he took out his iPad and started playing a game. He didn’t hide the screen from his boys (or the little boys in every pew behind him), but it seemed to calm them down. I thought it was an interesting way to calm the kids…until mom came back. As soon as she came back, the kids moved back to sit by mom, and…dad kept playing his game. Through the rest of the meeting he played that game while the people at the pulpit gave some of the best talks I’ve heard in years.

I thought of those two little boys who would grow up thinking church was for building a digital civilization rather than a family, a high score was more important than a testimony, and a father was someone who was there to make mom cry. While I thought about the example those two little boys were getting about what a father’s role is, my thoughts wandered back to the happy shoveler two weeks earlier.

Whether we like it or not, our kids are watching. We’re teaching them how to react to the world and how to treat other people. We’re teaching them what is important in life. They’ll be fathers and mothers like the fathers and mothers they observe every day. They’ll act like the people they observe the most. Hopefully those people our kids observe are the kind of people we want our kids to be.

And as I turned inward to wonder what type of dad my own children were observing each day, I could hear my little girl laughing as the moon said goodnight to her in its own special way. 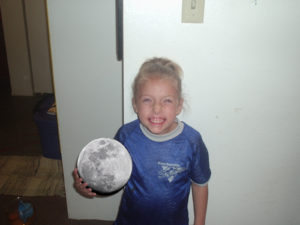 And that made me smile. Again.