A funny thing happened to my daughter recently. A boy at high school passed her a note in the hall (Yep, I’m old enough to have a high-schooler now. Yikes). The note was written in a language she couldn’t read, so she did what any right-thinking kid would do – take it home to show dad.

The note was, in fact, not written in a language from this earth. Say what? Are you just fiddling with us, Bryun? Nope. The boy had written my daughter a note in elvish – as in J.R.R Tolkein’s Middle Earth elvish! Now, I didn’t possess the ability to speak this language, but had enough geekiness from a former life to know it was from Middle Earth and did a search online for the key to translate it.

Fast forward a few minutes for the search to be finished and a few more minutes to translate (the vowels took the longest to figure out), which letters were which, and read a few pages on which version of Tolkein’s elves wrote this particular dialect (I said it was a former life, not one that had completely gone away).

So what did the note say? Good question. Let me explain… No, there is too much, let me sum up (another geek reference for anyone who caught it). It said:

You are an elvish princess and I think you’re pretty. I’ve got a crush on you.” 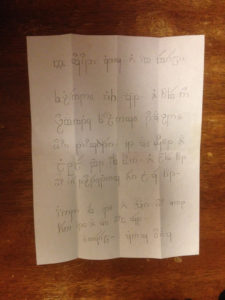 Not in my life, Legolas.

So, with my newly discovered key to geekiness, I couldn’t let this opportunity pass. I didn’t tell my daughter what the note said, and promised I wouldn’t tell her until she delivered a note from me (written in elvish) to her wannabe beau. This is what MY note said:

If my daughter is an elvish princess, that makes me an elven king. As a king, I have a legion of elven warriors waiting to destroy you at my signal. Watch your back.”

She delivered the note, and said his reaction was this:

Fast forward a few days. Legolas is no longer interested. Kate is happy she’s free of him. Way to go, dad…er, I mean ‘king’!

And that’s how a potential problem was taken care of by the geeky King Crush-Destroyer. No more love notes, no more elf-speaking stalkers, no more worried dad (for a few days).

So, for Kate there’s a happy ending, as the boy is completely disinterested in her.

For one of her friends it’s not as happy, as she became the new target of the elven boy’s affections.

And as for my legion of bloodthirsty elves, they’re still awaiting my signal…